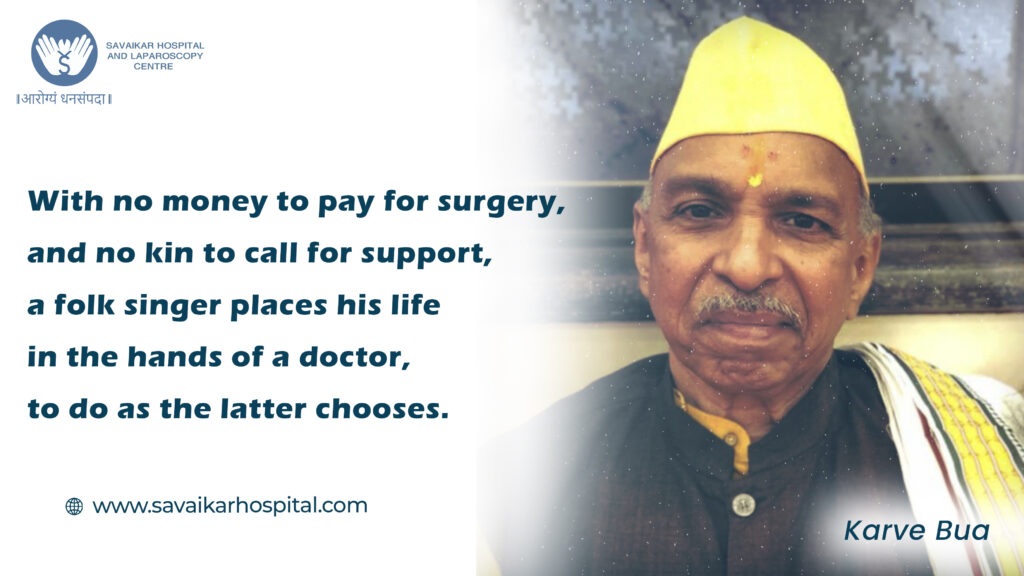 To operate or not to operate, that was the dilemma

With no money to pay for surgery, and no kin to call for support, a folk singer places his life in the hands of a doctor, to do as the latter chooses.

Karve Buva gets teary-eyed every time he speaks about Dr. Pralhad Savaikar, the surgeon who saved him from certain death.

Krave, 68, is a keertankaar, a singer of hymns, who lives in Mumbai, Maharashtra. He is usually at his busiest between September and October, answering calls from temple staff to sing at their Navratri celebrations.

The Navratris are the nine days that devout Hindus spend in the worship of Goddess Durga. The 10th day, also called Vijayadashmi, marks the time she slays the demon king Mahishasura. The day also coincides with another epic event in the Hindu calendar, when the prince of Ayodhya, Lord Ram, kills Lanka’s king, Ravana.

In 2008, when Karve was visiting the Shri Manguesh Mandir (Shiva temple) at Ponda in Goa for one such Navaratri event, an ulcer in his stomach burst without warning. “I was having food with the temple priest when I began feeling uneasy. I was soon in severe pain,” he remembers.

As his condition deteriorated, the priest helped him reach a local doctor who, after providing some temporary relief, put him on to Dr Pralhad.

Dr Pralhad, who runs the multi-speciality Savaikar Hospital in Ponda, quickly took Karve in, and after the initial examination, concluded that the latter needed immediate surgery if his life had to be saved. 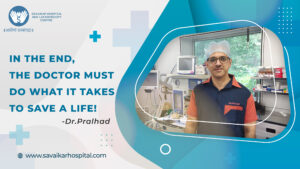 Ulcer bursts can lead to internal bleeding, causing heavy blood loss and possibly death. Karve was in that state of emergency. “I suspected he would not survive a day without the surgery,” Dr. Pralhad recalls.

Something else was, however, troubling Karve. The emergency had come upon him all too suddenly. He had neither the money to pay for his surgery nor the money to stay at the hospital. Furthermore, he had hardly the time to send for someone from his family.

As his anxiety bit, he thought it best to say no to Dr Pralhad, and to return home to carry on the treatment there. The doctor, however, was having none of it.

Money was not on Dr Pralhad’s mind. He, in fact, had reassured Karve that money would not come in the way of his surgery.

There was, however, another dilemma: In the absence of Karve’s family members, who would give the consent for his surgery? Consent, beyond other things, is also a way of indemnifying the surgeon, should a surgery fail.

Karve was in precarious condition. It was clear, without the surgery he would not last the day. If, however, Karve died on the operating table, and no consent were in place, hell could break loose!

The hospital, where Dr. Pralhad works, was built by his father. It is today, one of the oldest and most reputed hospitals in the area. Dr. Pralhad, too, is a well-known laparoscopic surgeon, who commands the trust of the community he serves.

His reputation, and so also the reputation of the hospital, therefore, hung on his decision whether or not to operate on Karve.

Eventually, having considered all aspects, Dr Pralhad went ahead with the surgery!

Today, Karve lives happily with his wife and son in Mumbai. He has gone back to his life of travelling and singing. In fact, in the parts where he lives and works, people call him bua, the sobriquet given to a folk singer.

Ask him anytime about Goa, and he says, God visited him in the form of Dr Pralhad.

The doctor, himself, is reticent about it. He says ethical-moral dilemmas are a near constant in every doctor’s work. In the end, the doctor must do what it takes to save a life!